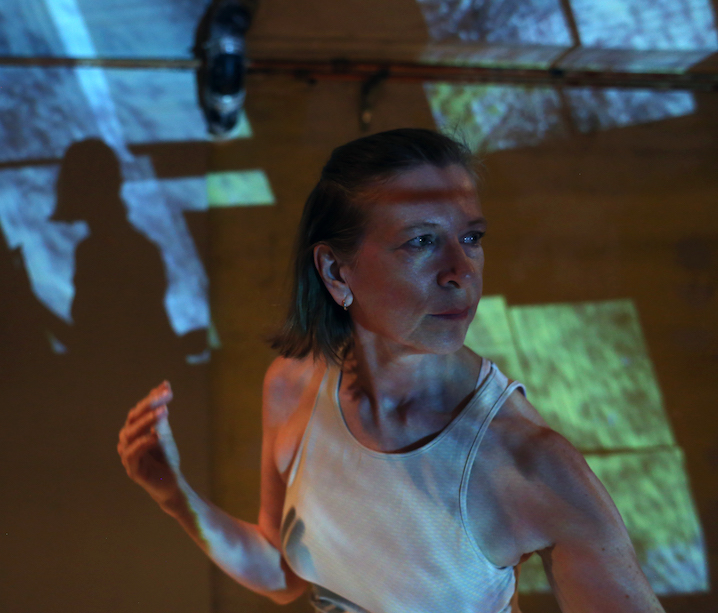 Sybrig Dokter is a choreographer and performer in the field of contemporary dance, visual arts and contemporary theatre. Sybrig was educated as a dancer at Codarts, Rotterdam and in London and New York. After moving to Stockholm 1995 she initiated international projects in a. o. Moldova, Estonia, Belarus and Ukraine and founded Lava-Dansproduktion together with Benno Voorham in 1997. In recent years Sybrig collaborated with various artists both in the role of choreographer and as a performer in cross-disciplinary projects.

She is interested in how physical practices create different bodies; human bodies, bodies of interest; bodies that become instrumental in creating ways of communicating, contexts to perform in, ways of existing together. Her practices create different bodies that are subject and object of the decision making process embedded in the choreographic work. 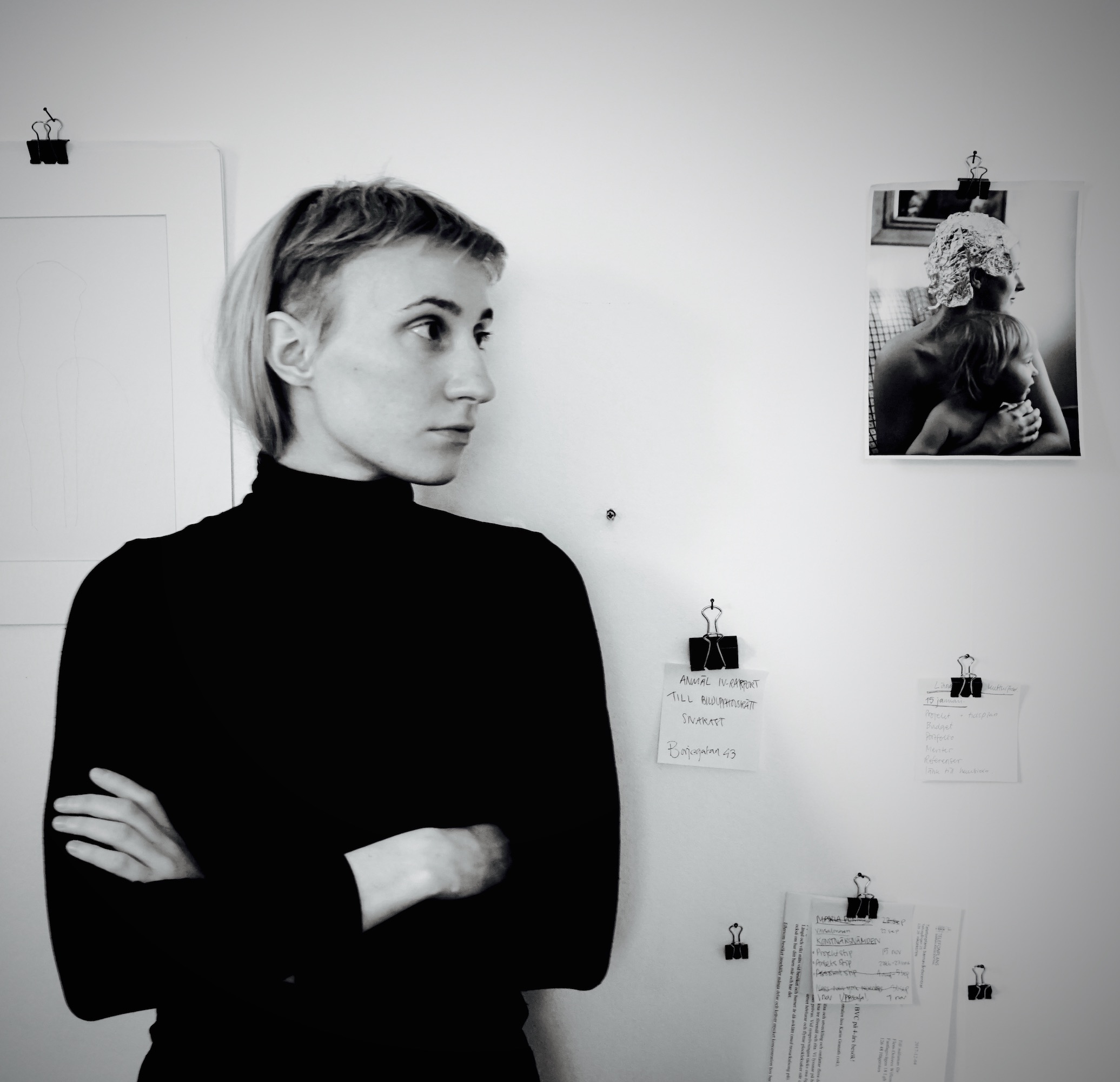 Alva Willemark, born 1988, is a contemporary artist based in Stockholm Sweden. With Care as a key word she explores the body from different perspectives, how it feels, sounds and is affected, through work-intensive processes but with simple means and observations of everyday life. As Willemark works with both performance, objects, installations of sound and image, as well as text, the central endeavor is always some form of contact with the inter-human language and she tries to let all of the bodys senses lead the choice of material.

In recent years she has worked under the title; ‘Close-to-body services’, where affect is the basis for an investigation of affective body-related labors. The project perform and imitate gestures of healing, makes visible an intimate politics of health revolving around concepts such as ”physical communication”, ”care”, and ”gaze”.

Willemark holds a MA in Fine Arts from Konstfack University College of Arts Crafts and Design. She participated in Cairo Biennale in 2018 and has also exhibited and performed at Konstfrämjandet Stockholm, Kunstakademiet in Trondheim, Södra teatern Stockholm and Aqua-carré in Berlin as well as several galleries. Awards and grants include Konstfack principal grant (2017), the IASPIS international grant (2018), and The Swedish Arts Grants Committee´s one-year working grant (2020). 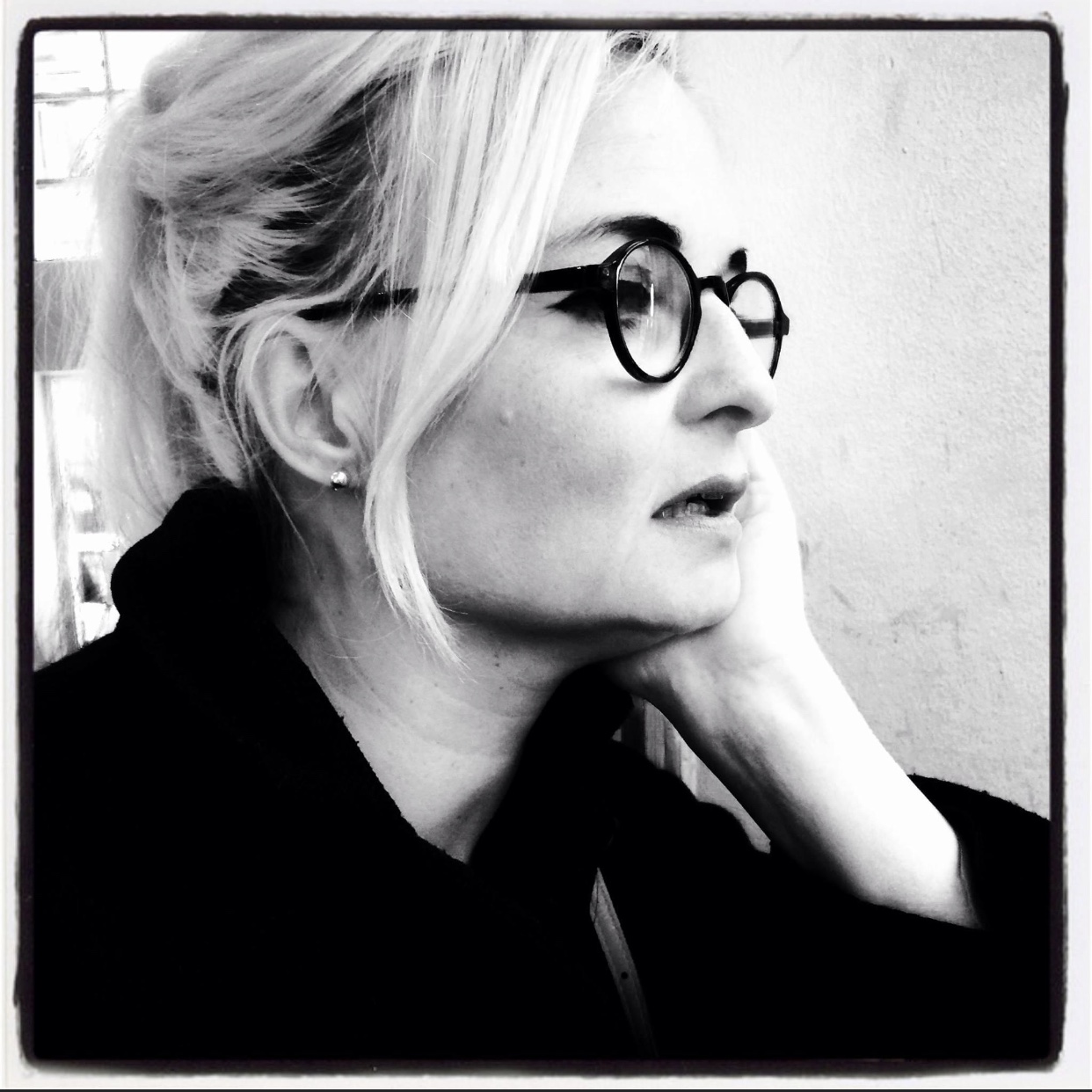 Anna Knutas Blomquist is a fashion designer born in 1965. She studied fashion design at ESMOD in Paris and then stayed in France for 15 years where she got a wide experience in design, trend consulting, illustration and teaching, mostly in Paris but also in the south of France.

Her first job at a couture fashion house where she got to experience the fantastic work in the ”ateliers” has shaped her vision of fashion as an art form, but it also made her long to design clothes for ”ordinary people” who can not afford to buy custom-made garments.

After her 2 children were born, the family moved from Provence to Stockholm where Anna continued to work as a designer for several brands. Through her work and through her many inspiration- and production trips around the world, she has come to question the commercial aspect of fast fashion, stereotypes, working conditions and consumption. To experience other cultures, to see the back side of fashion, where it is actually manufactured, the knowledge and everything you do not normally see or notíce has of course been very enriching too.

She was one of the co-founders of the brand K-OURAGE, whose idea was that fashion must dare to take a stand and to take responsibility. To unite courage and fashion (mod och mode) Anna left K-OURAGE 2018 and is currently working for the French / Swedish brand Busnel, whose 100-year-old small factory in Bretagne stands for the craftsmanship and quality she values. At the same time, she has a residence at Transit kulturinkubator in Stockholm, where she explores clothes and fashion from a more artistic perspective in terms of volume and shape, gender, reusing the already worn and what is considered beautiful and ugly. She lovingly dissects old garments, remodels them. And turns them, preconceptions and herself inside out. 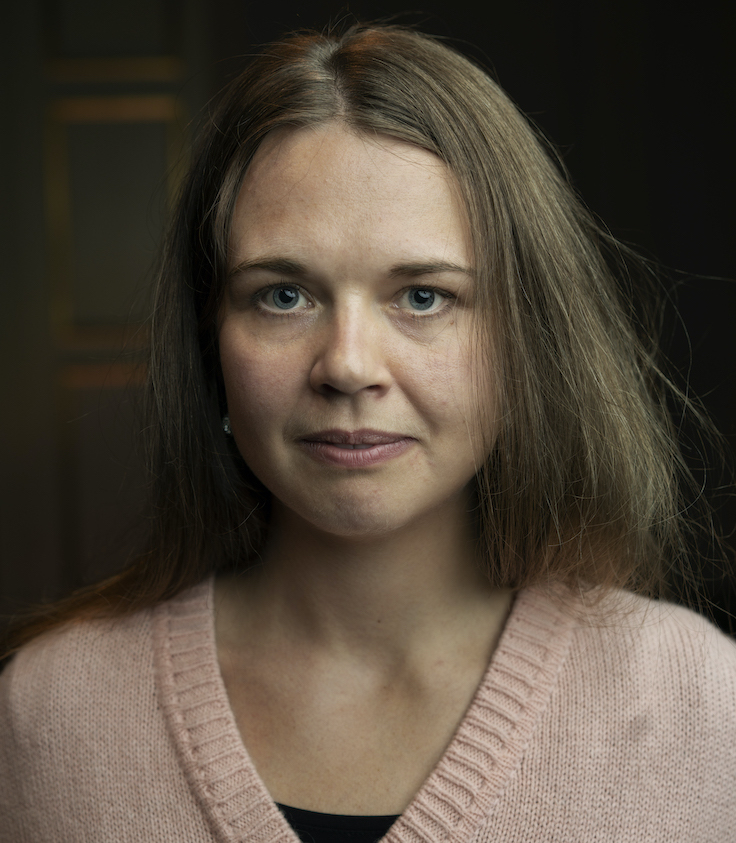 Anna Jakobsson is a producer and artist-researcher based in Stockholm. Her practice expands over the fields of contemporary music, opera and theatre and is distinguished by an interest in feminine narratives and non-hierarchical working methods. Anna’s work often explores various modes of audience participation and she wants her work to be both gentle and challenging in once.

She holds a MA in Performance Practice as Research from the Royal Central School of Speech in London. Anna also studied stage directing at the College of Opera in Stockholm. Since 2017 she works as a producer for Konstmusiksystrar (Sisters in Contemporary Music), a network of artists, producers and educators working to increase the representation of women, transgender- and non-binary people in new music.

2018-2019 Anna initiated and produced Konstmusiksystrar’s preliminary study I slumpens tjänst (In the service of chance), funded by the Swedish Art Committee Society. The study examined chance and randomization as methods for music curation and involved a large number of organisers and institutions within the Swedish contemporary music scene.

2019 she curated the project Am I the only one? A correspondence with Clara Schumann in collaboration with Konstmusiksystrar. The project was initiated to celebrate the memory of composer Clara Schumann’s 200nd birthday and included a commissioned piece written by five women composers as well as a staged concert with The Swedish Wind Ensemble in Stockholm. Anna currently holds a two years-long residency at Transit kulturinkubator in Stockholm. 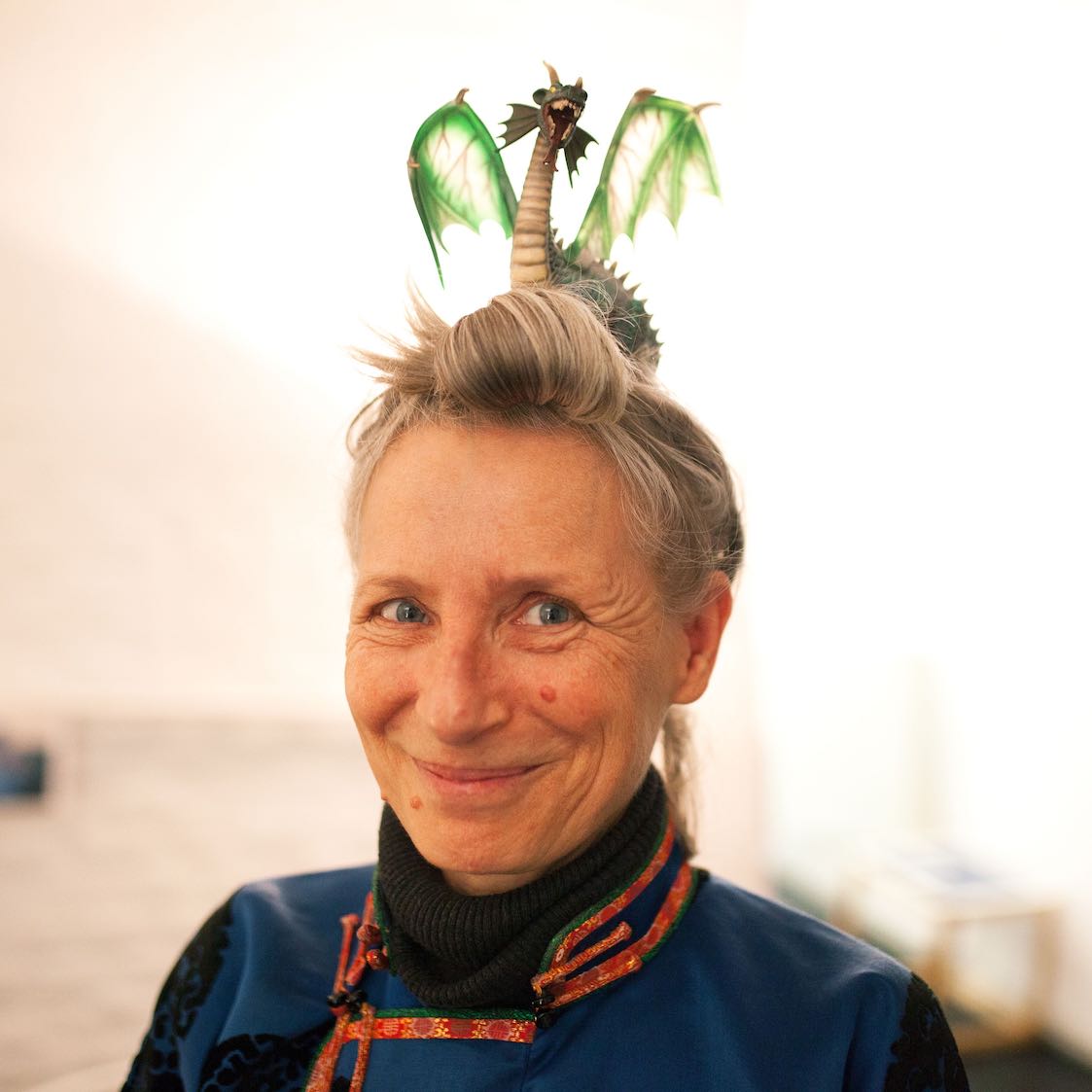 Anita Kaya (AT) is a freelance choreographer, performer, curator and net worker, based in Vienna. She studied experimental theatre in Vienna at the Dramatisches Zentrum Wien, contemporary dance in Vienna, Germany, Italy and New York (study grant BMUKK) and Movement Analysis and Notation at the Austrian Society for Dance Therapy. 2019/20 she completed the university course Curating in the Scenic Arts/University Salzburg/Munich.

Since 1984 she has been working as a dancer / performer / choreographer in dance and theatre productions, a.o. directed by Ruben Fraga and Nigel Charnock, and was co-founder and member of several theatre and dance collectives. Under the label OYA-Produktion (1988–2005) she created twelve feature-length dance productions, numerous (site-specific) performances, installations and two dance videos in artistic cooperation with artists from various fields, performed at festivals and venues in Austria, Mexico, France, Italy, Finland, Germany, Hungary, USA/New York.

In 2000 she co-initiated the artists-for-artists association Im_flieger, and in her function as artistic director in collaboration with other artists she is developing new core concepts and structures of artistic cooperation: e.g., the European residency program for young choreographers TERRAINS FERTILES 05 (Bucharest/Vienna/Paris) which was awarded the innovation prize 2005 by IG-Kultur Wien; the international exchange program CHANGING SPACES, and the transmedial CROSSBREEDS Platform at the interface of performing and visual arts.

She is engaged in the body as a store of individual and collective memory, in transdisciplinary formats in the intersection of artistic practice and theory, and in the social aspects and practices of choreography as performative order of space, body and materials. She likes to work in transmedial collaborative settings and (performative) installations/situations. Her last works were mainly positioned at the interface of (dance) history, archiving, installation and performance. She is part oft he transdisciplinary research project Stoffwechsel - Ökologien der Zusammenarbeit and a laboratory about sleep and dream. 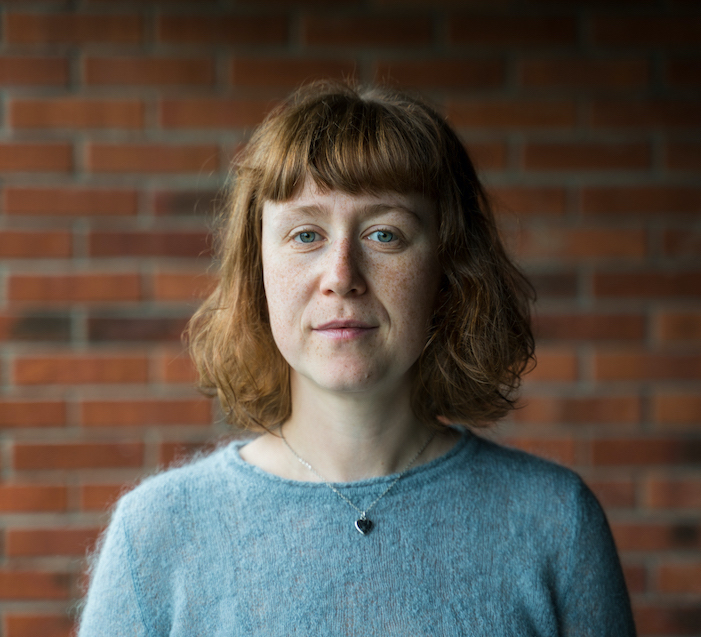 Marta Forsberg is a composer, sound artist and musician working within the field of installation art and electronic music. Dedicated to creating an immersive environment, her work explores intimacy in music and performance through minimalist sound and light sculptures - a sonic visualisation.

Marta studied Electroacoustic Composition at the Royal College of Music in Stockholm and Fryderyk Chopin University of Music in Warsaw. After completing her studies she has worked as a freelancer – composing and performing her own music as well as working in interdisciplinary collaborations with other artists and on commission from art and music institutions.

In addition to her purely artistic activities, she is also active as a member and initiator of Konstmusiksystrar (Sisters in Contemporary Music), with whom she organized international conferences (Berlin), music courses (Gothenburg, Härnösand, Witten - Germany), panels and lectures (UdK in Berlin, Sound of Stockholm festival), and participated in the artistic research project "In The Service of Chance".